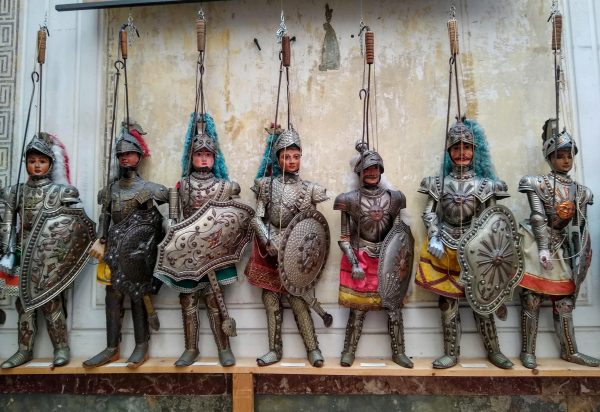 At first I balked at paying 5 Euro for a ticket to see what … a marionette museum? But Sharon said, “We have to experience this. UNESCO lists the Sicilian puppet theater on its Intangible Heritage site.”

Now I think that the Antonio Pasqualino Museo Internazionale delle Marionette ticket is a bargain.

Located in the ancient Moorish La Kalsa district of Palermo, the Museum is housed on a narrow side street between Piazza Marina and Via Butera. If you miss the modest signage, you may very well miss the museum.

The ground floor is lined with shadow puppets from Java. They feature ornate designs with faces in profile, some have movable arms. They are mounted on sticks and their shadows are projected on a backlit cloth, where skilled puppeteers tell ancient stories. 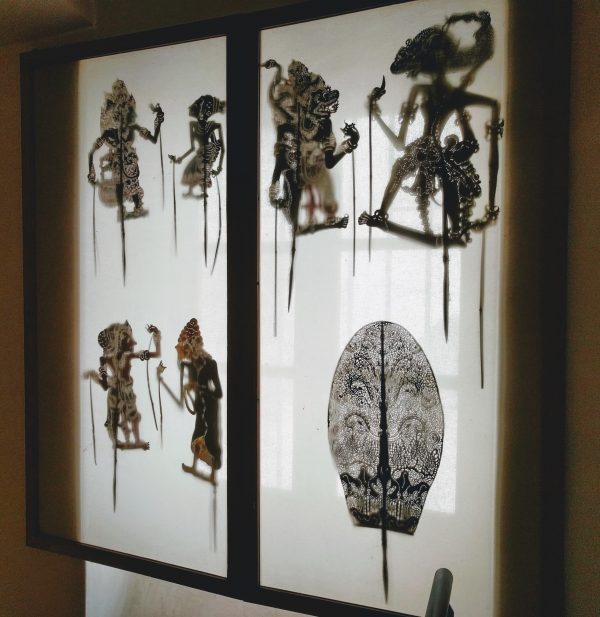 And so begins an enlightening marionette and puppet pageant through global history connecting cultures with the strings of marionettes.

What’s a Marionette, What’s a Puppet?

A marionette is a doll-like figure or animal whose movements are controlled by strings operated by masters from above. They can talk, sing, dance, jump, fall, do everything we can but in a clever, exaggerated style.

A puppet, on the other hand (!!!), is a sock-like creation whose movements and expressions are controlled by the hand within the puppet.

As we moved through the two-story museum we saw hundreds of colorfully detailed marionettes of varying sizes and costumes. These tended to be Italian (Sicilian and Neapolitan) in origin although other European countries embraced marionette theater as well.

But we also saw static and video examples of other marionette and puppet entertainment from Mali to Bali, from Vietnam to China, from Japan to the Congo.

We relived the evening in Hanoi where we witnessed a water puppet show: thrilling fish and water buffalo action, with figures skimming across the water telling their stories.

We learned about Vittorio Podrecca, a Sicilian lawyer, who in 1913 created the Children’s Puppet Theater devoted to entertaining kids while teaching them about history. His troupe literally toured the world adapting their stories to the countries and visited. 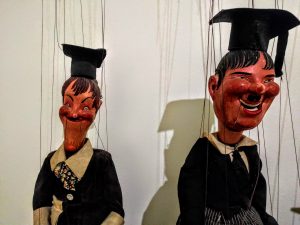 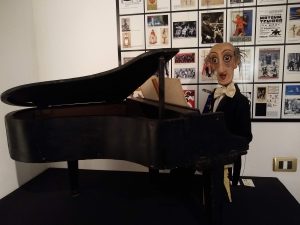 The touring company finally shut down in the early 1950s with the expansion of cinema and television targeting young audiences.

I got a big kick from the Laurel and Hardy marionettes which threaded yet another string across cultures.

To learn more about Sicilian puppet opera, check out this Visit Sicily article.